(born July 19, 1949 as Whitney Wesley Hadden in Clarksville, Tennessee) is an American magician, and the winner of seven performing awards (for performances in showrooms at the Magic Castle) from the Academy of Magical Arts. He has been nominated by his fellow members for "Magician of the Year" in Close-Up, Parlor and Stage, Bar and Lecturer more than thirty times. In February 2006, he also became Vice-President of that organization, and served for four years in that capacity. 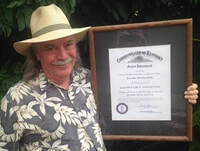