known professionally as Paul Daniels, was an English magician and television presenter.

He achieved international fame through his television series The Paul Daniels Magic Show, which ran on the BBC from 1979 to 1994. He was known for his catchphrase,
"You'll like this... not a lot, but you'll like it!" and for his marriage to his assistant, Debbie McGee.
He was awarded the "Magician of the Year" Award by the Academy of Magical Arts in 1982, the first magician from outside the United States to receive it. He also won the Golden Rose of Montreux in 1985. He was a Member of the Inner Magic Circle with Gold Star. He has been described as "The Godfather of Magic" and has been repeatedly credited with inspiring many top professional magicians to start in the profession.
Daniels was outspoken on matters including politics, current affairs, magic, entertainment, and fellow celebrities. He also appeared in reality television shows. He was described by Lord Michael Grade, former controller of both the BBC and ITV, when talking of Paul on BBC News in 2016, as 'a genius', 'a brilliant showman' and a 'pillar of Saturday Night for the BBC in their golden era of ratings'.

Newton Edward Daniels was born on 6 April 1938 in the South Bank area of Middlesbrough, the son of
Handel Newton "Hughie" Daniels and Nancy (née Lloyd). He was of Welsh descent. His father was a cinema projectionist at the Hippodrome Theatre and a worker for ICI in Wilton, North Riding of Yorkshire. After completing his education at Sir William Turners Grammar School on Coatham Road in Coatham, North Riding of Yorkshire and holding his first job as a junior clerk in the treasurer's office of Eston Council, Daniels served as a conscript in the 1st Battalion, Green Howards, during his national service. He was posted to the British garrison in Hong Kong before training as an accountant in local government.
Even in his early age, Daniels had thinning hair, which he claimed to be an act of "magic". He later sported a wig for much of his television career. After working as a junior clerk and then as an auditor in local government, he joined his parents in their grocery business. He later set up his own shop, at one point a mobile shop, but eventually gave this up in favour of his growing career as a magician.
In 2012 Daniels explained the origin of his stage name to The Guardian, saying: "I borrowed the name Paul from my first son, who was born in 1960. I was born Newton Edward Daniels, everyone called me Ted, but Paul worked better for showbusiness". 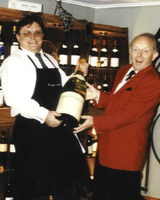 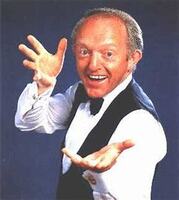